It was announced at WPC 2013 that Microsoft would be making it easier for Office 365 customers to move between the various plans and now, less that 4 weeks later, the first move has been made.

This first update makes it MUCH easier to move to a higher plan within the same family. Considering that this scenario is the customer saying “I want more features and will give you more money for them” it was an oddly difficult process; it required a call to support, cancelling subscriptions and manually re-assigning licenses! Now it is all done with a simple, automated self-service wizard in the Admin portal – happy days! The current options are:

NB: As the moment, only subscriptions of 300 or fewer users can be switched with this method. Also, this is only available to those with the new portal – if you’re still waiting for the upgrade this won’t be there.

Microsoft are also working on expanding the switching options to make it possible to move between families. Later this year the following will be available: 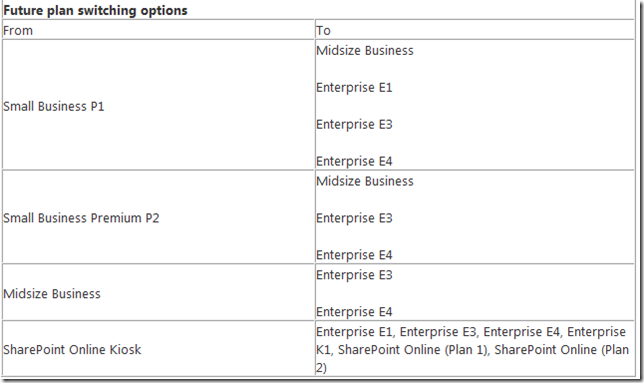 Giving people the ability to easily move from Midsize Business to E3 will be a great option.

For more info head over to http://blogs.office.com/b/office365tech/archive/2013/08/01/office-365-customers-can-more-easily-switch-plans.aspx

3 Replies to “Switching between Office 365 plans”