The beta of Office 2010 is available now from MSDN and Technet and this is a look at what’s new, what’s fixed and what caused me problems…hopefully it will be interesting and useful for you 🙂

Installation and some issues:

The first thing to note is that you can’t upgrade from the 2010 Technical Preview; this means you’ll need to uninstall and do a reboot. I had a bit of a hairy moment where I logged in after the reboot and was presented with a guest account…I had a little “oh dear” moment thinking I’d managed to screw up my machine! Thankfully it was just a little glitch, I logged out and back in and all was well.

I double clicked the .exe and…I got the “cannot upgrade from previous versions” message again! I had a little stress and then started looking for the culprit…turns out it was the Office Outlook Connector that was getting in the way. If you’ve got that installed so you can access Hotmail from Outlook, make sure you uninstall it 🙂

After the install was complete, which took about 20 minutes, I started up OneNote…and got a warning box that I had possibly counterfeit software! It told me it was for “corporate or institutional use” only and that I had to connect it my corporate domain…WHAT?! I was told on Twitter that it had worked fine for other people so I tried again…added the key & clicked “Install Now” again. The next time I opened up OneNote it asked me to activate it online, which thankfully worked!

So now I’ve got it all installed and activated but it was a bit of a rollercoaster ride! To be fair, this machine has had a few issues with various iterations of Office over the years so I guess there is something not quite right in the registry!

The first thing I notice is that the Office components have all got new icons:

The Outlook Connector doesn’t recognise the beta and installation fails; however as you’re setting up Outlook, it offers to go off and install the Connector for you. I gave it a try and it pulls down a different beta file…clearly made for Office 2010 as it installed without a problem.

Having said that, the Outlook setup wizard doesn’t recognise that it’s installed, which is pretty annoying, and so goes off to find the settings online. After checking and double checking my account details to no avail, I tried another reboot…lo and behold, this time, it recognised that the connector was installed and went through with the account setup 🙂

The folder structure on the left looks different than the Technical Preview and I noticed this:

See Web test at the bottom…what could it be? Let me show you: 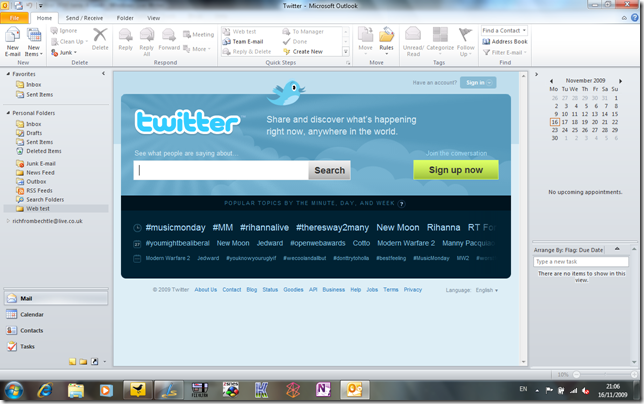 That’s right, Twitter inside Outlook as default…that’s pretty cool 🙂 Once you’ve logged in, you can leave the Web Test folder and still be logged in when you come back.

At the bottom of a new email, you now get this:

If you expand it using the arrow on the right, you get: 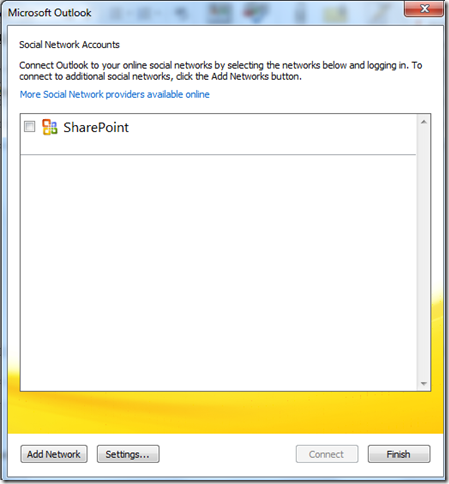 Which hints at the social networking features present in Sharepoint 2010 🙂 It says there are more providers available online, but the link just takes you to a general Office site at the moment 😦 Once this is up & running, it will be pretty awesome…having, and I’m guessing at which will be included, Twitter, FaceBook & LinkedIn info and profiles available inside Outlook will be great. I’m not on Facebook (I know!) but I use the other two, especially Twitter, quite heavily for networking with suppliers, customers and colleagues.

Blurring the divide between “Social Media” and “Corporate Resources” is a great move, one aimed at this “New World of Work” that will resonate with the graduates coming into the workplace as well as us cool, hip (!) people that get it too. I can imagine some managers/directors being a bit unsure about this but I’m confident they’ll quickly see the benefits…just like corporate IM.

I’ve linked one of my Live Accounts into Outlook and just sent my first test email. It asked me to complete a “captcha” to verify my account before it would send it…something I don’t remember 2007 doing? You only need to do it once 🙂

Once you open up a new mail to someone who has emailed you, you get a message that Outlook wants to run an add-on. Click to run it and then Outlook starts showing you related mails and items.

I have to say that it takes quite a while for new mails to show up in the networking pane…hopefully this will be improved in the final version.

Also, I’m finding that I’m needing to close and re-open Outlook for all the changes to take place and, while it’s showing emails, attachments aren’t showing up in the pane. Again, I think this is down to it’s beta status.

The Backstage Icon look a bit different too, a bit more boring:

Was there the option to swap colour schemes in 2007 and/or the 2010 tech preview? I’m quite liking the black: 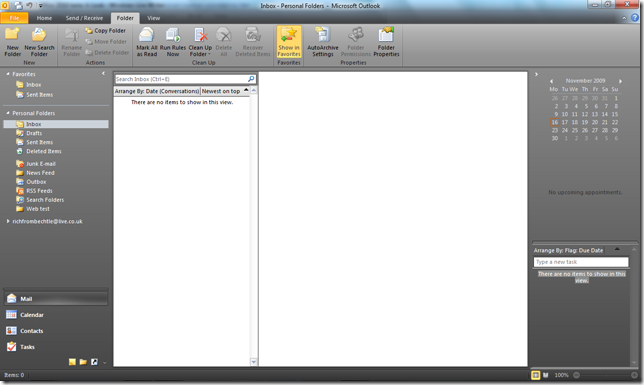 This leads me onto something I realised the other week. I’ve been paying much more attention to the ins & outs of Office 2010 than I ever did 2007 and so finding all kinds of great new features. However, I can’t be 100% sure if they’re new to Office or just new to me 🙂 There are a few in Outlook where I think this may be the case…if so, feel free to let me know in the comments!

That takes you to the section that shows you what things are replaced with what. There are things such as “yuor = your” but it also shows you how to make the sign for Pi and much more…pretty interesting: 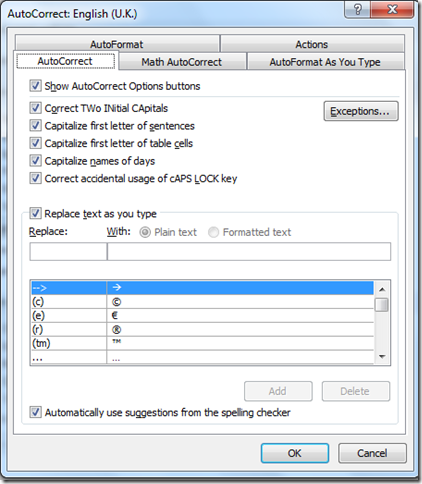 Another feature I like the look of is “Keep track of formatting”: 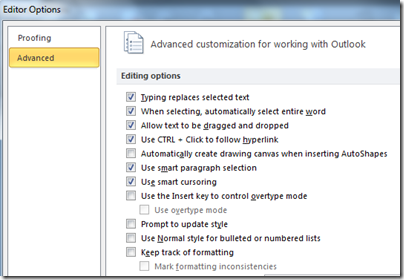 As for the other components:

I have to say that they all look pretty much the same to me, at least at this early stage!