I’ve been looking around the Microsoft New Efficiency site (blog post here) today and there are a number of great videos giving an overview and introduction to the new features of Exchange 2010. One of the key ideologies behind the new version of Exchange has been that it will behave the same whether it’s on-site or hosted in the cloud. The slide below shows the main pillars of Exchange 2010:

The following screenshots go into more detail on the features behind the above: 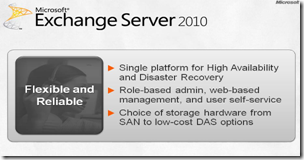 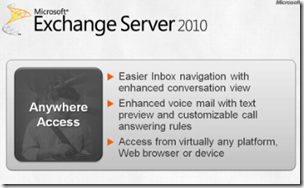 You’ll see here that Exchange 2010 now has integrated archiving capabilities. As you can see below, it gives users a 2nd mailbox which can be used to store archived data with all the familiarity and ease of Outlook.

It also has a new “Legal Hold” feature which tracks all edits etc on a user’s email-even those that are deleted.

I saw this week that Exchange 2010 has the ability to migrate users during an upgrade (from 2007) without any downtime! A huge bonus to System Admins everywhere 🙂

Outlook Web Access is now called Outlook Web App, so still the same initials but it shows a different approach. Rather than it simply being a way to get your emails when you’re without Outlook…it is now a proper, defined entity in it’s own right. That is also shown by the fact that OWA 2010 will have around 95% feature parity with the full Outlook client. I don’t know what the percentage is currently but certainly in my opinion OWA 2007 is lacking a lot; so roll on OWA 2010! This will be of big interest to people looking at Exchange Online aswell…