Google App Inventor for Android could be one of the coolest things they, or anyone, has brought out.

I’ve got a Google Android phone and I love some of the apps that are available for it. They make things so much easier/quicker/more enjoyable etc and are truly what a smart phone should be full of.

What I don’t have is any knowledge of Java, other than an awareness that it exists! I’ve got some rudimentary VB skills and a bit of Javascript so I looked in Java but it appears to need much more time devoting to it than I can give it. That means all my app ideas have been languishing around and I thought they would forever more.

Google’s App Inventor has the power to change all that!

A WYSIWYG tool allowing you to create apps without ANY programming knowledge.

How does it work?

It uses “blocks” of pre-written code that cover most actions you could want in an app and lets you drag and drop them together. 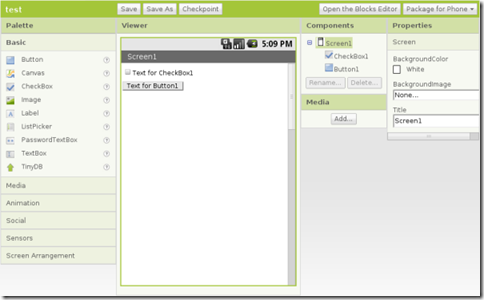 When I first saw this I assumed it would be very basic and that all the cool functionality would be missing but that’s not the case:

“use App Inventor to write Android apps that talk to your favourite web sites, such as Amazon and Twitter”

These quotes from the Google App Inventor site show that it can be used to create some really cool, funky and innovative apps…and that is exciting!

The App Inventor site is:

The sign up form (which requires a Gmail address) is:

The tutorials are here:

The User Group is here:

I’ve requested access to the beta and am really hoping I get allowed on…this could be really great for me and my phone, others who may want my sure to be awesome apps (joke!), the Android community as a whole and Google in general.

One Reply to “Google App Inventor for Android”