It was announced a little while ago that MSDN Premium subscribers would receive a number of free Windows Azure hours as part of their subscription: 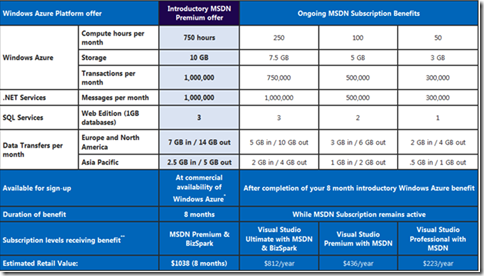 and these would be, as expected with MSDN, for test and dev only.

However, I saw over on Eric Nelson’s blog that this is no longer the case. Microsoft have:

“decided to lift this restriction so that you will be able to use your Azure benefits for normal (production) use, if needed”

As Eric points out, the above offer expires after 8 months so don’t rush to sign up if you’re not going to make use of it straight away…make sure you get your “money’s” worth 😉 After that time period, the level of free access drops down as per the below chart:

This is a great way of making Azure easily available to the 1000’s of developers with MSDN subscriptions. It will allow them to test it as a solution, show the company how it will benefit them and then easily move to a production environment with reduced admin and cost.