Extended Security Updates (ESUs), available for Windows Server 2008/R2 and SQL Server 2008/R2, were introduced in 2019 to extend available security support for 3 more years beyond the end of the products’ extended support periods.

It’s now less than 12 months until the end of the ESU period for SQL Server 2008/R2 and Microsoft have announced they will be providing 12 additional months of cover – but only for workloads running in Azure. This will also apply to Windows Server 2008/R2 – the end of ESU dates are:

End of support for 2012 Server versions

They have announced the availability of ESUs for the 2012/R2 releases of SQL Server and Windows Server. Extended Support for these ends:

It’s now less than 12 months until SQL Server 2012 goes out of support so if you’re using that within your organisation, you need to come up with a plan to:

Windows Server 2012 is getting ever closer and today we had some exciting news – changes to the licensing – Yay! This has genuinely got me quite excited

There are also feature differences between the versions.

Going forward with Windows Server 2012 we will have:

Std & DataCenter will have feature parity and the only difference will be the virtual server rights. This is a question I’ve already seen on Twitter:

So it’s good to get an answer straight away.

Features previously not in Windows Server Std that will be with 2012 include:

This follows the same path as the changes recently made to System Center and, while it may make small installations more expensive, overall it reduces costs and simplifies the licensing for end users.

There are 2 other editions of Windows Server 2012 – Essential & Foundation:

As you can see, Essentials & Foundation are aimed at the very small networks and both are limited to 1 CPU. Things which are missing from the lower editions include:

To see the full list of feature differences between the various editions, download the Windows Server 2012 datasheet here:

Windows Web Server can only run web facing workloads but does not require any CALs (Client Access Licenses) which makes it perfect for hosting external sites. However Web Server is being discontinued in the next release but before tales of astronomical rises in costs as companies are forced to buy CALs for every single user of their service:

“Despite the removal of Web Server edition, web workloads running on a Windows Server 2012 edition will continue to receive the “CAL waiver” that is in effect for these workloads today. Windows Server CALs will not be required to access the licensed server if it is only being used to run web workloads”

If you have active Software Assurance (SA) on Windows Server licenses at the time of release for 2012, you will receive rights to the new versions as per the below: 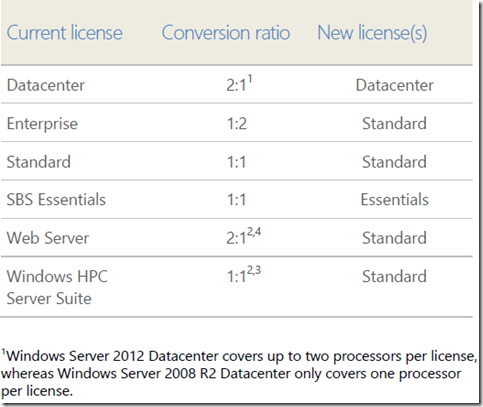 Small Business Server has been around for years, combines Windows Server & Exchange Server and is aimed at networks with less than 75 users. Now however it’s time has come to an end…

SBS has quite a thriving community built around it with many passionate advocates, most of whom are sad/angered to see it go. I on the other hand am really rather happy about it! I’ve always found it to be an extra, unnecessary complication when new sales staff/customers get involved with licensing. I realise I’m not going to be popular with that opinion and I’m equally sure that if I worked more in that area I’d have a different opinion but as it is, from the Mid-market & Enterprise space, this is a welcome move.

You can find the full FAQ here: