Extended Security Updates (ESUs), available for Windows Server 2008/R2 and SQL Server 2008/R2, were introduced in 2019 to extend available security support for 3 more years beyond the end of the products’ extended support periods.

It’s now less than 12 months until the end of the ESU period for SQL Server 2008/R2 and Microsoft have announced they will be providing 12 additional months of cover – but only for workloads running in Azure. This will also apply to Windows Server 2008/R2 – the end of ESU dates are:

End of support for 2012 Server versions

They have announced the availability of ESUs for the 2012/R2 releases of SQL Server and Windows Server. Extended Support for these ends:

It’s now less than 12 months until SQL Server 2012 goes out of support so if you’re using that within your organisation, you need to come up with a plan to:

Microsoft have this week announced some relatively major changes to the SQL 2012 product line up and it’s licensing.

There are now 3 editions of SQL Server:

Here’s the big change – there’s no more Per CPU licensing…now it’s by Core.

This is a major, although not wholly unexpected, move by Microsoft. Other vendors such as Oracle have long charged by the core but Microsoft have always stayed with physical sockets as their measure…until now.

I’ve been expecting this for a while, especially as 6-core processors become more commonplace and Intel keep making them more powerful. What once took 2 processors can now be done with 1 and what once took 4 now needs just 2, so Microsoft must have been seeing a decline in their SQL revenue over the last 18 months or so.

To break down the licensing:

Standard = Per Core or Server + CAL

Enterprise = Per Core only

You’ll notice that the new Business Intelligence (BI) edition is Server+CAL only so what should you do if you have external/anonymous users and/or a huge number of people accessing the BI server/s? SQL Enterprise Edition 2012 contains ALL features of the BI edition so use that to license by core.

It’s worth noting that “Core based licences will be sold in 2 core packs.” but a big clause is:

“To license a physical server properly, you must license all cores in the server with a minimum of 4 cores required for each physical processor in the server.”

This means if you’re running with dual core CPU’s you’re going to have to buy more cores than you have. <—This will be a big cause of outrage I’m sure however it does mean that as you upgrade your server hardware and get CPUs with higher core counts, there won’t be a big extra licensing cost.

Whenever Microsoft bring out new versions of software and change the licensing rules, the big question is always “What if I need to buy new licenses in the meantime?” and we, as partners, have to work to make sure that we help customers future proof any investments they make in the run up to the new product release.

There are some other rules and guides around the ability to add core licenses mid term to an EA/EAP etc but I don’t want to make this section TOO big!

Microsoft have released estimated pricing in dollars so let’s take a look at that and see how it stacks up to current 2008 R2 costs. 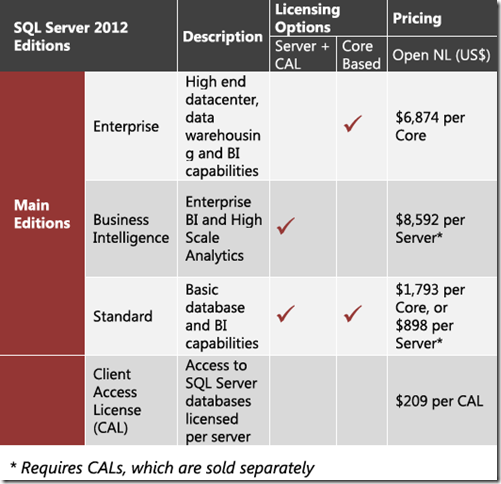 So you’re looking at $7172 at a minimum for a SQL Std server which stacks up pretty well against the current processor licensing costs. I’m sure people will find scenarios where this is more expensive but they’ll surely forget to take into account all the new features like Project Crescent & Juneau that have been integrated into the new editions, and so I don’t think that price should really be the big thing here.

Any other editions available?

SQL Datacenter, Workgroup & Standard for Small Business editions are all being retired with the 2012 release.

Web Edition will only be available to hosters via SPLA (Service Provider License Agreement).

Developer, Express & Compact editions will continue to be available in the same ways as right now.

The big move is that SQL’s licensing will follow the same path as Windows Server, both in editions and also virtual licence allowances:

Here’s a Microsoft diagram that shows many of the main differences between the now 3 editions: If you currently have SQL Server 2008 Enterprise and Software Assurance there is “a complete transition/migration path” but I don’t have any details yet…they will be available nearer launch on May 6th 2010.